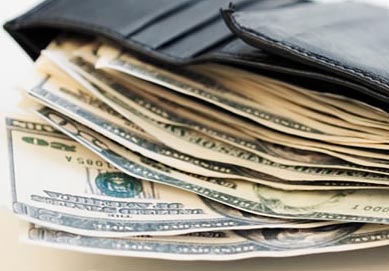 Melvin felt in a daze as he looked into his wife’s eyes. They carried a wild look like a tigress that stood before a dead prey and had a hungry litter.

“One question, Melvin, just one. Did you do this?”

“The money, the wallets.”

Joanna paced the room and nodded. “I didn’t think you could. How could you get this much money and make up such a story?”

Joanna went to her lunch box that she had put on the dresser along with her purse. She handed it to Melvin. “Open it.”

Melvin undid the latches on her metal lunch box with plaid squares painted on the sides, expecting to see her leftovers. Instead he beheld the familiar wallet stuffed with cash. He gaped at it for a full minute and then looked up at his wife.

“You kept it.” He reasoned.

“NO. I told you how they mocked me and made fun of me for turning it in. I went to the lunch room with Shirley and Mona like usual. We sit over at the side near the window where the big flower bed was. I sat down and we all said the blessing. I opened my lunch box and under my sandwich was that there wallet. I nearly  went to the bathroom in my pants. I shut it fast after I pulled my sandwich out. I could barely eat.”

“Did you count it?” Melvin asked.

“In the rest room. Seven hundred and eighty.”

He sat on the bed in silence as she continued to pace the room.

“I thought all afternoon about this Melvin. I could barely wait to get home.”

“What are we going to do honey?”

“It’s in the Old Testament. ‘and let fall also some the handfuls of purpose for her, and leave them, that she may glean them, and rebuke her not’. You see Melvin, this was God all along, you were right baby. Ruth worked for Boaz as a field worker, kind of like you and me. Most owners were mean and cruel. Not Boaz. He took pity of Ruth and let her eat and drink with his maidens. He tells his field bosses to leave some grain on the ground for her, some “handfuls of purpose”. Melvin, this here wallet is a gift from God.”

Melvin sat in shock at his smiling wife. “You think?”

She sat beside him and kissed him warmly. “Let’s go downstairs and eat those beans and cornbread. After supper let’s go to Goldbricks and get ice cream. Then we’ll go to Freeze’s and buy a load of groceries, I’ll get their man to deliver so we don’t have to carry it. Honey, get plenty of Bull Dirham and even a quart of Macon’s Beer, heck get two, one for me too. I already too the day off tomorrow and told the school the kids had to be absent. After we go down to the bank in the morning, I thought we could ride the bus over to Dalton and visit the amusement park.”

Melvin sat in dumbfounded and began to cry. Joanna wiped his tears and tilted his chin up to her eyes. “Promise me you will start going to church with me.”
“Sure, but the beer?”

“Melvin, I love the Lord but I think he wants us to enjoy life sometimes.”

The next day, they did go to the bank and catch up their mortgage and visit Dalton and ride the roller coaster. But, that’s not all. Melvin found the same wallet and money in different places for the next six days. At the end of thirty days, the police dutifully called them to claim to other wallets. Melvin went to church for the next six months. His leg got better and he went back to work. He was hired to work more hours and stopped going to church. Joanna stopped going when they moved to Dalton and Melvin got a job as the assistant manager of a lumber yard. He never found any more wallets, but he remained a believer that the Lord wanted all of us to enjoy life. He employed an act he always called “handfuls on purpose” by being nice to people who never expected anything good to happen.