Recently, my oldest son, John Jr.,  who writes a weekly column for LA Screenwriter, penned an excellent article that writers need to find their genre or type of stories they are inclined toward. It made me think about what my own genre might be since I seem to write about a variety of themes. However, I gradually realized most of that I like to write has a dark side. Even the poetry I labor over is full of heartbreak, loss of job, loss of status and the down and out. Oh, there is plenty of love for many things, but it is definitely not about rainbows and unicorns. My first and second novels were about cowboys and witchcraft. I wrote a true story about a convicted murderer – Murder and Deceit. I continue to write two blogs about two men wrongly convicted of murder in Minnesota.

So far this year, 2017, I have completed two screenplays,  a western with a dark twist, and a modern crime story. Over my life I can think of two things that affected my love of those kind of stories. In college I read all of Arthur Conan Doyle’s Sherlock Holmes series. I felt transported back to London circa 1890 and accompanied him and Dr Watson on every coach ride and all nighter at 221B Baker Street. In the late 1980’s I saw a movie, True Believer, starring James Woods and Robert Downey Jr. The plot revolved around Shu Kai Kim, a Korean wrongly convicted of murder. This was a subject I never considered before and it opened up a new way of looking at the American Judicial system for me.

In the last 20 years, there is one story I become addicted to: HBO’s Sopranos. 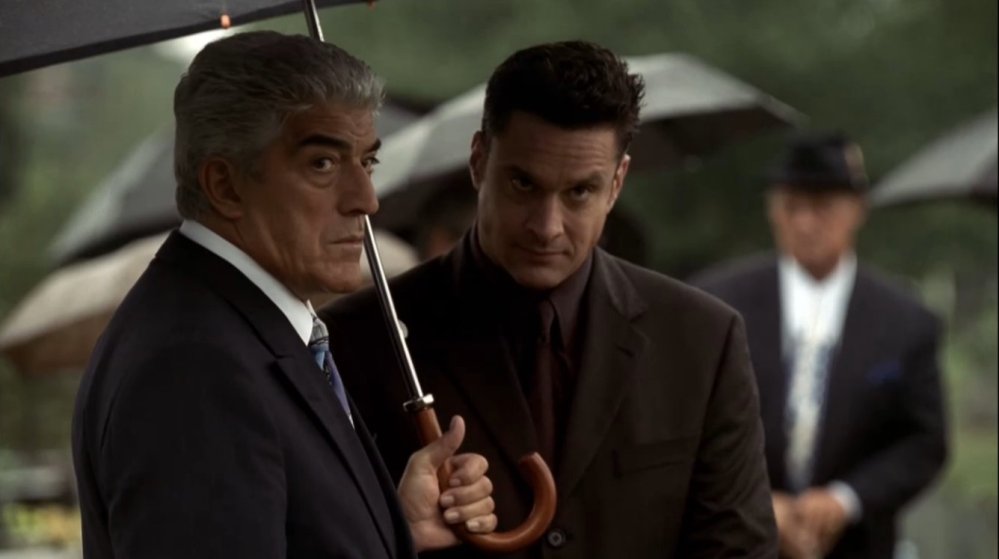 Pictured above is the late Frank Vincent and a friend of mine, Chris Caldovino. I have watched every episode over 100 times and go through all six seasons every year. It never gets old. The creators stocked the show with plenty of rich characters and a string of plots that seem real. In the 1990’s I binged on Law and Order and today I am a fan of Michael Connelly, LA’s own creator of Detective Bosh.  The list is long, and I think the point is made how I found what I like to write.

Let me share some ideas on the “how”. Stories need conflict. There is plenty in crime stories. The very subject suggests that is their nature. However, Sopranos took it into ordinary life. Tony and company are rarely shown pulling a major heist and usually only murder one of their own. The series is about the struggles of the day, gangster style.

In Stephen King’s majestic book, On Writing, he reveals one of his techniques. He explains that he thinks of an ordinary event in his life, and asks “what if”. This is where original fiction is born. In my first published book, Western Soul, there is a short story called “Spearfish Gangsters”, that is based on my family reunion at Lake Texoma. Since then, I have learned to look at other so-called “ordinary events” and ask “what if”. Doing this should help in getting a plot or a premise together.

The success of shows like Law and Order, Sopranos, The Wire and Deadwood can be summed up in two words – memorable characters. So, how does a writer create a character, one that audience relates to or cares about? I begin with their names. As I start to think for a good name for the story, I keep a stack of index cards handy. I write a single name and tape it to the wall above where I work. They stay up there until the story is complete. After I feel there are enough names up there, I begin to write a back story, sometimes a paragraph, sometimes several pages, about who these names are. I tape those to the wall under their names as they come to me. This may take weeks. I don’t set a time limit, except to work on them five days every week. I force myself to look at them every day. There is where the story lies.

This is a key step many writers skip. Sometimes an idea occurs and a paragraph or a page or two is done quickly. Then the writer struggles with where to go from there and the story dies a common death. An outline is the road map to the story. Once the outline is done it needs to marinate as more ideas are produced by finishing the project. As actual writing commences, you will be flooded with more pictures in your mind that add color to the story. An outline will keep the story living and breathing. I suggest the Save The Cat templates that are free online for screenwriting, but are useful in any story.

Setting a goal to complete is crucial to any project. You start by committing to a daily goal. Let’s say you only want to work  five days per week. Then set a goal of words (if a novel) or pages ( screenplay). When you finish the day’s work, you are done. Go enjoy the balance knowing you did what you said you would do. Make a chart of your progress and stick it on the wall so you can hold yourself accountable. Then set an over all goal of how much this needs in words or pages. Once you do that, it will be easy to see how long until you are done. Don’t worry if you get behind, just keep going.

There’s a saying in the real estate business “Location-location-location”. The saying applies to story telling and especially crime stories. Most writers agree you should “write about what you know.” Where you set the story is every important, even if the place is fictional. Get to know the real estate in your story. Make it real or make it up. If it is a fictional place then draw a map of what you imagine. Your audience will see this map as it unfolds in your story. Screenplays MUST be seen. The real estate is in every scene heading. Where is it? What does it look like? Day, night or what? Hot or cold. Let the audience feel where the story takes them.

Crime stories don’t need a moral or a point. They must be entertaining. The Godfather has no point to the story, but I love seeing Michael evolve into the Don no matter how many times I have seen the film. The Sopranos have no point but if Gandolfini was still alive I would love just one more episode to see what the old crook was up to. The characters become your friends.

Next Sunday I will probably post a poem I have been working on about my hometown. It’s called “I remember Denison…in its hey day.”