What a dynamic and exciting title. However, now that I have your attention, let me make a case for the antiquated and dying art of a real hand written letter, even in the internet-fueled age of 2014, soon to be 2015.

This is written with the complete knowledge that not only do people not write letters, they rarely read anything longer than a text or an email. This treatise is not going to criticize any of the electronic forms of present day communication, only to make a compelling case for actually writing a letter.

The above letter is from Abraham Lincoln explaining his views on slavery. It may be hard to read, but most of our hand writing today is pretty bad and just as hard to decipher, so we type one on Word and press print. However, there is something highly personal and intimate when someone writes you a letter. You feel their soul.

I have a few stories of how powerful and life changing writing letters has been in my own life.  Growing up in a small town in Texas in a time when people wrote letters regularly made a deep impression on my outlook on how life occurs. My mother would read letters to us from aunts and family friends as we had dinner. There was no need to look up most addresses as she had them memorized. She would explain what they implied and gave us brief editorial comments on what she thought of their news.

There was no need for me to ever write a letter as I did not know anyone my age who lived outside our little town, until one day when I was at the local library. To my knowledge, I was the only person in our family who ever entered the Denison Library. I loved to roam its aisles and see what I would discover. One day after school, when I was 12, I pulled a book down that was a guide about how to obtain autographs from famous people. Inside it contained the addresses of hundreds of folks and what to put in the letter asking for an autographed picture or just their signature. Instructions were firm to be sure and include that all important SASE (self-addressed stamped envelope) was in heavy bold type. This was fascinating to my young mind. Just to think, I only had to write a letter and mail it and the possibility of a famous person touching the letter and mailing something of theirs (their name) arriving in my mail box was too good to be true. As a test I found the address of the New York Yankees.

About a month later my SASE arrived with a picture signed by Mickey Mantle. I was delighted but upon closer inspection the famous signature looked like it had been made by a stamp. I devised a new plan and rode my bike to Main Street News where they sold black and white pictures of baseball players for about 75 cents. I bought every one that had a Yankee uniform. Over the next many months I received some of them back including Roger Maris and Whitey Ford. I branched out to the Dodgers and got a reply from Sandy Koufax.

By the time I was 14 I wrote a letter to President Lyndon Johnson asking him what the Viet Nam war was all about? Our antiquated maps in school did not have such a name and it took hours at the library to find out it used to be called French Indochina. I was amazed it was such a small country and could not understand why any war the USA was involved in there would last over a month. He did not write me back. The Pentagon did. When I came home from McDaniel Junior High School one day, there were 5 boxes addressed to me, and a letter from a 4 Star General. My parents were confused and a little upset that our house was getting mail from Washington DC. Such things were to feared and avoided at all cost, especially typed letters with heavy bond. However, the boxes contained books and pamphlets of war propaganda, that after reading them, I rejected such nonsense. My letter campaign soon ended when the next batch of mail arrived a month later. Over half of the folks I wrote to never responded so I had no idea who would write back. I arrived home to find my father had taken off work and was at the kitchen table with my mother. They nervously smoking cigarettes. On the table was 2 small boxes from the FBI. I was ordered to open them as they craned their necks to see what danger was inside. I showed them a large, framed picture of J. Edgar Hoover, signed to me, and several books detailing the Bureau’s history. Included was a letter to me urging me to consider and career there and a letter of recommendation from him if I chose to apply when I grew up. My parents were angry and firm: NO MORE LETTERS. I had learned at an early age the power of just writing a simple, hand crafted letter.

In my 20’s, when my sons were born, I was suffering from acute depression why my biological father was not in  my life and seemed to remain silent and a ghost to me. I wondered what was wrong with me? One of my aunts urged me to write him a letter and tell him how I felt. I did. I wrote him letters from 1979 until 2006. I would write every time those feelings returned and felt better after I mailed them. He never responded. His wife did in 2006 after he died. Those old scars were healed, finally after years of writing letters. I will never have many questions answered, but because of those letters, I have met my cousins and visited the state of Minnesota as well as my father’s home town. My oldest son took me to dozens of places there to gain knowledge of who he was and that helped me bury the past.

At the same time I was visiting Minnesota for the first time in 2009, I had become interested in Jack Nissalke, and his claim of being innocent of a cold case murder he had been recently convicted. John Jr. and I traveled to Winona, Minnesota, and then to Rush City to visit Jack. We amassed a ton of evidence and began to investigate the murder. I went back and looked through newspapers in the 1980’s and interviewed local people, until I was convinced he could not have committed this heinous crime. I wrote a book and have an active blog you will find under “My Other Blogs”. His appeal comes before the court again in a little over a week. Jack and I have corresponded frequently over the years. I have boxes that contain hundreds of his letters. Jack’s letter writing is now masterful after he was first trying to write the early ones. I have become to know him by these letters and every one makes me smile or cry. 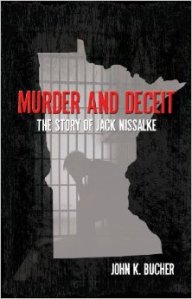 Writing a letter is still relevant and has the power to move mountains. Try and you will have your own stories.